Zero-maintenance 3LUC4-45D electronic ignition means you won't have to fool with points and timing again – always stays in perfect tune!

The HS45D4 distributor is compatible with these standard Lucas parts:


We inspect each distributor thoroughly; everything is checked, adjusted, lubricated, etc. We then set and test the advance curve on a precision distributor testing machine.


Use a stroboscopic timing light. Timing should be set initially to about 24° BTDC at 3,500+ RPM, vacuum hose connected. Firing order is: 1-3-4-2, counter-clockwise (anti-clockwise). The ignition timing should be checked with the engine running, using a stroboscopic timing light, ensuring optimum engine performance and economy. Paint a small line of white paint on both the reference pointer and the appropriate mark on the timing scale to make them more easily seen. With the engine running at the specified speed, the appropriate timing mark should be in line with the reference pointer. Rotate the distributor body clockwise to advance the timing, or counter-clockwise to retard it. Tighten the distributor clamp. Reconnect the vacuum line to the distributor's vacuum canister port.

To measure coil primary resistance: Label and remove all wires to coil ( + or - ). Using a common digital multimeter in the 200 Ω mode, cross the red and black leads of the Ohmmeter. Allow 10 seconds or more for the reading to settle and write down the reading. Still in the 200 Ohm mode, measure between coil’s + and - terminals. Allow a few seconds for the reading to settle, until it stabilizes. Subtract the previous reading, taken with the leads crossed, to compensate for Ohmmeter’s inherent resistance. Do not use a low-resistance coil, such as the MSD or Accel coil; they don’t have enough primary resistance for this application.

If the charging system voltage, measured at the coil's + terminal, is more than 13.9 volts at any RPM level, the voltage regulator likely needs replacing or a 1.4 Ohm ballast resistor should be wired between the coil's + terminal and the red HotSpark ignition wire. Too much voltage can damage the ignition module and other electronic components. 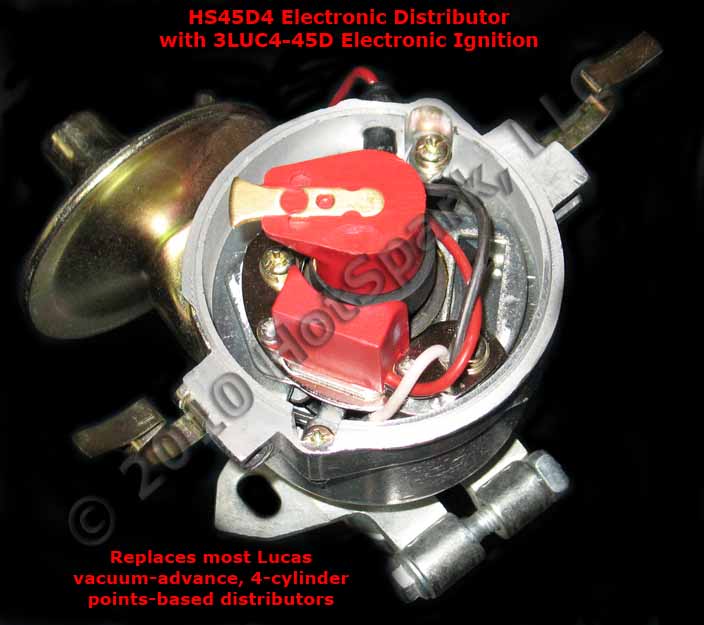 This is to express my thanks for the excellent service you recently provided me. The Hot Spark electronic distributor has behaved faultlessly during our 17,000 miles trip through South and Central America.

Ideal for Use with Hot-Spark Electronic Ignition Conversion Kits with red 3-series ignition module or for use with breaker points.